Orchids in Fruit at Yeosden Bank

Yesterday we joined the ANHSO field trip to Yeosden Bank in Buckinghamshire near Chinnor, one of the newer BBOWT reserves.    It was led by BBOWT's warden.  It is an area of chalk grassland with a small area of woodland - ash and beech.   In the grassland were lots of  Chiltern gentians (Gentianella germanica)  and Small scabious (Scabiosa columbaria).   At the woodland edge there were dense patches of Devil's-bit scabious (Succisa pratensis).   To some the latter is quite a novelty, but from my time on Skye I remember it as one of the commonest plants, found in almost every tetrad on the island. Whereas to me, Chiltern gentian is worth getting excited about!


Yeosden Bank has several orchids and I thought I would try to identify spikes based on appearance, leaves if extant, seed pod dimensions and the angle of attachment of seed pods to the stem.   I think I found examples of three orchids, Common spotted, (Dactylorhiza fuchsii), Pyramidal  (Anacamptis pyramidalis) and Chalk fragrant (Gymnadenia conopsea): 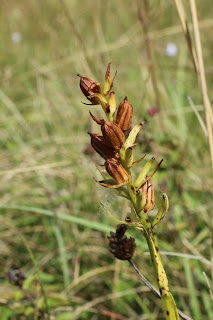 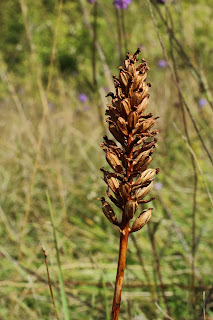 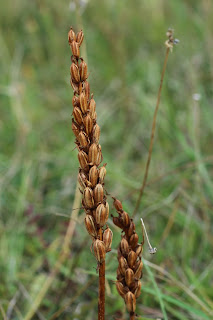 Seed pod length 7.4 mm width 2.6 mm
Angle of attachment 11 degrees
It is getting a bit late in the year for butterflies, but were numerous butterflies still to be seen though many were worn.  Amongst the fairly battered Common Blues, I am pretty sure this is a fairly battered Adonis Blue. 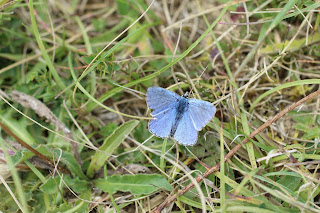 A mammal stole the show however  - a hare running up the bank.   As ever only a fleeting glance - and much too fast for a  photo opportunity.  They are such a treat to see.
Posted by Terry Swainbank at 05:59