I saw on Twitter a picture by Brian Laney, Northamptonshire's vice county recorder, who has encyclopaedic knowledge of Britain's flora, of a yellow-flowered plant, Yellow Monkswort (Nonea lutea),  which he described as the first record for Oxfordshire.  I thought I had seen it in Hook Norton a few days ago; a plant I did not recognise then, other than place it in the borage family, and I had  assumed it was a garden throw out, not worthy of further attention.  Yesterday I went to take a closer look, and sure enough it was Yellow Monkswort, a neophyte (an alien) of American origin, described as widespread in Britain but quite rare. The second Oxfordshire record.   It was on a bank under a low garden wall, near to some weeds - Groundsel (Senecio vulgaris), Ivy-leaved Speedwell (Veronica hederifolia), Hairy Bittercress (Cardamine hirsuta), -  but for me, someone who does not get too excited about alien plants, more interestingly by far, there were also a few plants of Muscari neglectum, a rare native plant.   This is in a few old gardens round the village, but is widespread on the village green in Chadlington, a few miles south.    I suspect it was commonplace in Hook Norton in the past, though there is no mention in Druce's 'Flora of Oxfordshire'. 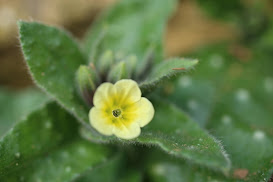 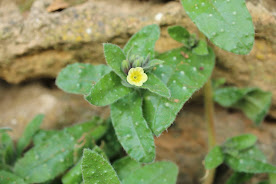 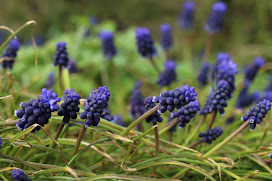 Muscari neglectum
In some villages churchyards are very good places to botanise.   The grass is cut too frequently for Hook Norton to be one of them, but yesterday there was at least a big splash of the bright yellow Lesser Celandines (Ficaria verna) in one corner.   There was also another alien, but not as uncommon, Rough Comfrey (Symphytum asperum) on a path leading to the churchyard . It is one I need to check whether I have got it right - if the leaves have short stalks then it is, but if they clasp the stem then it is Russian Comfrey. (I have been back since to have another look and it probably is Hidcote Blue, (Symphytum x hidcotense), though I could not see one of the key determinants - stolons) 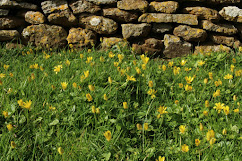 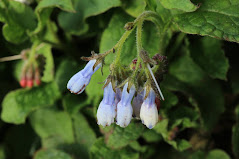 Finally I came across some Early Dog Violets (Viola reichenbachiana) at a crossroads under a wall, the first I have seen this year.   Because of where I found it I probably ought to check that one too, just in case it is a hybrid.  (I really should lug around with me the botanist's bible, Stace's 'New Flora of the British Isles', weighing just over 1.2 Kg, to avoid these uncertainties!). 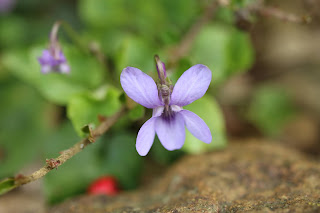 Posted by Terry Swainbank at 06:52